As a keen self-taught pianist I’m always excited to find innovative new web sites or apps that try to help you learn piano. I’ve written previously about OnlinePianist, which recently launched a more slick and powerful version of their interactive tutorial app.

Another richly rewarding site is freepianomusic.org. I must confess that at first my web developer brain saw the SEO-friendly domain name and site content, lots of mention of free material and free sheet music, and Google Ads embedded here and there and was a little suspicious… There are so many junk sites out there just trying to drive traffic and earn advertising revenue (especially in the area of guitar tab and sheet music) that the jaded skeptic in me suspected this might just be another of those.

I was pleasantly surprised though to discover that there’s valuable content here. Though the category links in the sidebar may give the impression the site is a treasure trove of free sheet music in fact it’s more of a ‘jumping off point’, with most of the sheet music pages linking out to online stores to purchase the actual downloads. There is however a lot of guidance and information provided, along with useful links to other resources (including the superb free book Fundamentals of Piano Practice). 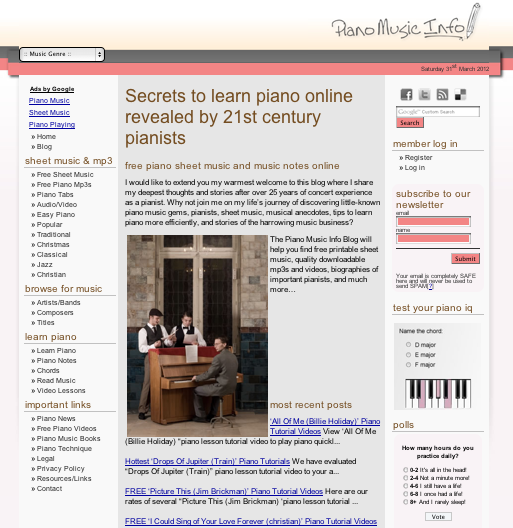 I enjoyed taking the “Piano IQ Quiz”, learning a little something about Percy Mayfield and Grieg along the way. Hopefully more interactive elements will be added in future!

Not only does the site have a lot to offer, but it turns out END_OF_DOCUMENT_TOKEN_TO_BE_REPLACED

Aside from the skillful use of a digital loopstation, what is perhaps most striking about the duo is their mixing of musical styles, blending pop, and Western and Indian classical music into one surprisingly cohesive performance. Speaking of blending – END_OF_DOCUMENT_TOKEN_TO_BE_REPLACED

The Vasari Singers and The Boxettes at LACF 2012

Last night was the first night of the London A Cappella Festival 2012, and it certainly got off to a tremendous start.

The evening began with foyer performances by several choirs from the “Music In Offices” initiative, including from the BBC and Channel 4. They sang from the balcony above the concert hall foyer downstairs, which a friend of mind pointed out was a kind of reverse serenade…

The first concert was the Vasari Singers – a choir I’d heard of but never heard. Before they took to the stage though, we were treated to a mini performance by Albert Hera, who apparently has been called the Italian Bobby McFerrin – not a bad description! He has an incredibly versatile voice and evokative facial expressions, and as he bopped and hooted his way through announcing the “L-O-N-D-O-N a capp-ell-a twen-ty twelve” he repeatedly cracked the audience up with his playful expressions, gestures, and sounds. Wonderful to start the festival with laughter and such a show of vocal capability!

Then the Vasari Singers began the festival in earnest, END_OF_DOCUMENT_TOKEN_TO_BE_REPLACED

How to teach music… in perfect harmony

“How to teach music… in perfect harmony”
at the London A Cappella Festival 2012
14:50-15:30 in The Wenlock Room
Saturday 14th January, Kings Place, London

The last few years have seen a sharp increase in people’s interest in singing. From X-Factor and Pop Idol, to SingStar and Rock Band, to High School Musical and Glee, it’s clear there is massive public interest in singing and vocal groups.

Unfortunately it seems so far like the message of each of those franchises is centered squarely on celebrityism and pop star success – rather than developing real musical ability.

Can this widespread enthusiasm be harnessed to really drive music education forwards and encourage a new generation of truly talented musicians to emerge?

This week the London A Cappella Festival is held at Kings Place, curated by The Swingle Singers and Ikon Arts Management.

Some initial suggestions for discussion topics:

The discussion will be open to everyone, and we’re hoping we might even entice a few of the festival performers to join us.

Details of time and location will be announced later this week, but the discussion will be at Kings Place during the day on Saturday and run for 30-40 minutes.

If you’re not currently planning on attending LACF2012… Why not? Read a bit about last year’s festival and change your mind!

Sincere thanks to Jessica from Ikon Arts for supporting this LACFextra event.