The Vasari Singers and The Boxettes at LACF 2012

Last night was the first night of the London A Cappella Festival 2012, and it certainly got off to a tremendous start.

The evening began with foyer performances by several choirs from the “Music In Offices” initiative, including from the BBC and Channel 4. They sang from the balcony above the concert hall foyer downstairs, which a friend of mind pointed out was a kind of reverse serenade…

The first concert was the Vasari Singers – a choir I’d heard of but never heard. Before they took to the stage though, we were treated to a mini performance by Albert Hera, who apparently has been called the Italian Bobby McFerrin – not a bad description! He has an incredibly versatile voice and evokative facial expressions, and as he bopped and hooted his way through announcing the “L-O-N-D-O-N a capp-ell-a twen-ty twelve” he repeatedly cracked the audience up with his playful expressions, gestures, and sounds. Wonderful to start the festival with laughter and such a show of vocal capability!

Then the Vasari Singers began the festival in earnest, with a remarkably varied repertoire which really showed off just what a versatile group they are. The highlights for me were Gabriel Jackson’s “I am the voice of the wind”, where the ladies provided a wonderful lilting sound texture to match the piece’s title, the strange (but expertly performed) “Gloria” from Poulenc’s “Mass in G”, and the beautiful gentle “Angel Song II” by Will Todd, whose vowel-only “Hosannahs” made for a very soothing sound.

The performance of Pierre Villete’s “Attende Domine” was soured somewhat by the reverb effect which was inexplicably applied. Presumably the PA system was on for sound reinforcement, but whoever decided a reverb time of literally a couple of seconds would be appropriate was very much mistaken… Although the choir were able to expertly stop on a dime, many of the powerful abrupt silences were spoiled by the artificial reverb tail.

The performance was rounded off with several pieces arranged by Ward Swingle, one of the group’s patrons, and the founder of The Swingle Singers. This brought a lighter flavour to the music, and the choir were joined by a few of the Swingles to sing solo parts and all the Swingles for “It was a love and his lass”. The final Vasari piece was “All The Things You Are”, the bouncy second half of which allowed them to really enjoy themselves, which was great to see. This energy was kept up as the Swingles joined them on stage again for the classic Swingle medley “Country Dances”, bringing the performance to a fun and upbeat close.

Some more foyer performances filled the interim before the evening’s second concert, a couple more MIO choirs and then a young male barbershop group, The Techtonics, who were good fun. 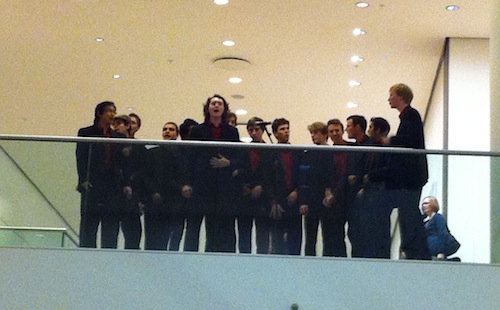 The second concert was started by another quick performance by Albert Hera – this time incorporating what to me sounded like Tuvan throat singing, interspersed with high pitch falsetto for a fun lively jumpy song. It’s hard to know how much these were improvised, but certainly he seemed to be enjoying himself and playing off the audience a lot. This second performance really gave the impression that he is essentially an aural clown! He plays, he entertains, he uses his voice and body to amaze and delight the audience, and never takes himself very seriously at all. Wonderful to watch and hear! 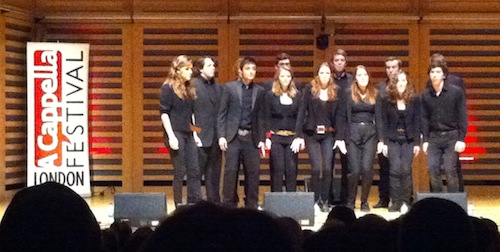 The concert then began with support act Cadenza, the Cambridge-based choir who won the “Voice Festival UK” competition in 2010. They performed a small number of songs. A mix of good humour with some fun choreography to keep things light, and more serious impressive pieces. Their “Hide and Seek” (Imogen Heap) was sung with such tight, careful control that the audience were clearly captivated. On the other hand, their mix of oldie and Timberlike-era “Cry Me a River” was full of fun – and followed by a raunchy “Holding out for a hero”, ending their set to loud applause and cheering.

One of the major highlights of last year’s festival for me were The Boxettes, a five-girl group performing… well I guess a mix of soul, dance and R&B – it’s hard to describe. But what’s most remarkable is that, befitting the festival, they’re a vocals-only group. With world champion beat-boxer Bellatrix grounding their rhythm section, the girls create a formidable, complex, rich sound to rival any carefully-mastered multi-tracked-to-high-heaven studio creation. It’s truly an amazing thing to experience live, and last year’s performance had left me with high expectations. 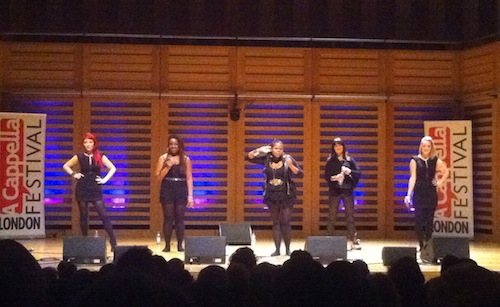 After taking the stage and singing a brief sung intro piece, they paused, and one of them threw out the question “Where’s the beats, man?” – a question Bellatrix leapt forward to answer, and one which nobody could wonder about for the rest of the evening. With a 10-song set and a couple of extras thrown in, The Boxettes blew the audience away. The applause as they took the stage made it clear people were excited from the outset, but this grew and grew as the evening went on. With beautiful vocal harmonies, powerful solo parts, thick buzzing synthy basslines, swift crisp drum sounds, yodelling, scat, and wholly incredible arrangements of all-original material, the girls kept the audience fixated throughout.

They started the set with “Hattie”, one of the stand-out tracks for me last year. In place of their normal shorter display of Bellatrix’s skills, this evening she was given a good few minutes for a solo beatbox set, which was a well-deserved showcase for her tightly-honed and amazingly versatile skills. She also took a moment later in the gig to explain to everyone how the girls could create such low bassy notes – answering the main question I had after witnessing last year’s performance!

As if unsatisfied that they’d impressed their listeners sufficiently, they put out a call for song titles or suggested words towards the end of their set, promising to improvise something on that basis. A loud woman’s voice from the back of the hall boldly called out “SHOW US YOUR TEETH!” and after a moment of cracking up and looking confusedly at one another, the Boxettes kicked into a terrific, impressive and entertaining improvised track, featuring lyrics about ‘chattering teeth’ (accompanied by appropriate sound effects from Bellatrix!), going to see the doctor and being told ‘show us your teeth’, that they ate too many sweets… and had to use Colgate.

It seems disrespectful in retrospect that the audience were laughing as much as they were, because the actual musical performance was hugely impressive. But it’s a testament to the true skill of this group that they could throw together a masterful collaborative improvisation with such relaxed skill that the audience felt able to laugh along. Amazing.

Update: Somebody had the good sense to film the improvisation and you can get a pretty decent idea of how great this was by watching: The Boxettes – Show Us Your Teeth (improvised)

They rounded off the set with single “Free” and did an encore with “Dreams”, which was met with their second standing ovation of the night. It seemed to me that their performance was more tightly honed and polished than last year’s, and though I feel the smaller, more intimate Hall Two they sang in last year was a better match for their style, they had the larger Hall One packed and created their own powerful vibe there too.

Swingle Jo made a joke as she introduced them: Last year Hall Two, this year the larger Hall One, next year… The O2 Arena! We laughed, but it’s absolutely believable that the hugely talented Boxettes could see massive success in the year ahead.