The workshop ended just in time to catch the tail-end of Irish quartet “Rún” who perform great folky a cappella in a variety of Gaelic languages. 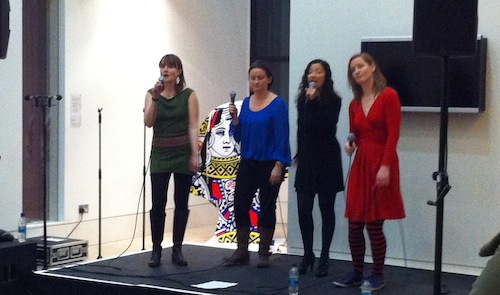 The first concert of the day was a rich barbershop affair, opening with the BABS champion quartet Crossfire who performed four songs in classic style (though strictly they weren’t all barbershop songs!)

After leading with a light and slapstick-y performance of “Stuck in the middle with you”, they relaxed into a solemn and pretty rendition of Diana Krall’s “When I look in your eyes”. This was only topped by their beautiful finale, “Send in the clowns”. 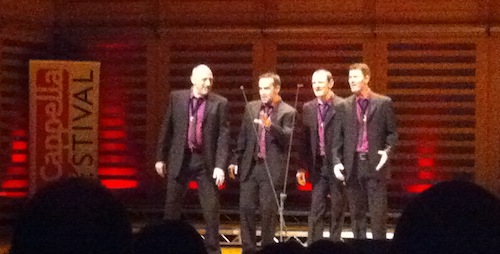 While the Cottontown Chorus took to the stage, Swingle Kevin attempted to assemble a barbershop quartet on the fly from the audience. The four volunteers managed a pretty decent version of the tag “The Shadow of Your Smile”, demonstrating Kevin’s point that Barbershoppers are crazy and will burst into song anywhere at the drop of a hat! As a former barbershop singer myself I can readily testify to this fact…

The Cottontown Chorus burst into action with their first number, “South Rampart Street Parade”, with an incredibly dynamic group routine – from a 50-strong choir this makes a pretty striking sight!

They followed with a somber but powerful “Brother can you spare a dime?” and then a fantastic version of Queen’s “Fat Bottomed Girls” (cheekily dedicated to their wives and girlfriends!)

I unfortunately had to duck out a little early to set up for the ‘a cappella & music ed’ discussion group but I’m told they ended their set with a fun Mary Poppins number, “Let’s go fly a kite”:

I’ll write later about the discussion group “How to teach music… in perfect harmony” – it was densely packed with ideas and experience from some really interesting people who all came from very different music ed and singing backgrounds – so it warrants a post of its own!

Kings Place was noticeably more busy all day on Saturday than on the previous evenings, and this was particularly evident for the foyer performance by The Refrains. Their sound check earlier in the afternoon had clearly caught a lot of people’s attention, and the downstairs foyer filled up to hear their actual set. 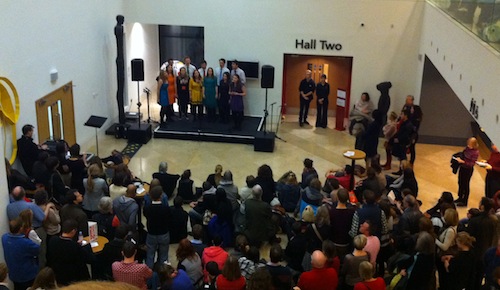 From their first song it was clear they had an excellent bright and colourful sound to match their outfits. A gentle and lush version of Billy Joel’s “She’s always a woman to me” contrasted well with the bounce of their fun and energetic Cee Lo Green cover (“Forget You”). Definitely a group to look out for in future!