Marc Sings For You. Why doesn’t everyone?

I recently wrote something about the future of classical music, and asked whether classical artists like James Rhodes and Thomas Hewitt Jones were leading the way by using social media to break down the stigma which normally goes along with classical music.

This time I want to look at another example of an artist – this time pop rather than classical – who’s trying innovative ways to reach fans and make a career in the modern era of net for nothing and the tunes for free.

Marc with a C is a modern day pop troubadour, writing songs in a varied but reliably catchy pop vein. That isn’t ‘pop’ in the sense of the Top 20 singles chart, which these days actually tends to mean R&B and dance junk. As listeners of his regular music podcast “The Real Congregation” know, Marc’s a real believer in the tradition, and I guess nobility, of pop music and how great a thing the 3-minute pop song can be.

Though his music tends to be straight up pop (and I mean that in a good way), his lyrics range more widely, often surprising with their content or style. I’m not going say too much more about his music here – because it’s all available to hear for free at Bandcamp and his website.

I also think he’s an artist whose large back catalog will hold different gems for different people. So if you don’t know his stuff, go take a listen. I’ll wait.

So aside from being a prolific singer-songwriter and performing regularly in Florida over the last 10 years, Marc is (like any modern self-respecting indie musician) active on Twitter and Facebook. And though he sells his music through his website and Bandcamp, END_OF_DOCUMENT_TOKEN_TO_BE_REPLACED

A New Life for Music in the Church (Part Four): Taizé

This is part four in a series of posts on music in the Catholic Church. Previously: Part one, part two and part three.

One big discovery for me during the World Youth Day trip was the music of Taizé – a Christian community in the East of France, where they have cultivated a distinctive style of worship, welcoming all denominations of Christianity and putting visual icons and a particular kind of repeating sung music at the heart of each service.

I don’t think I’d ever heard of Taizé before that week, though looking back later I realised I had once experienced their music.

A First Taste of Taizé

During a period of quiet prayer in a vigil service in my church last Easter, somebody started singing a simple tune, and others joined in:

The words were so short and the tune so simple, that within a couple of repeats I was able to join in, singing softly with the dozen or so other people there. It was a wonderful peaceful addition to the service and a really memorable moment for me. I recognised it as a new and different form of sung music than I was used to, but didn’t have the relationships or the information to really follow up on it and learn more at that time.

During the World Youth Day trip, some of the music used by our excellent volunteer choir was in a similar vein. In particular this piece caught my attention:

END_OF_DOCUMENT_TOKEN_TO_BE_REPLACED

A New Life for Music in the Church (Part Three)

This is part three in a series of posts on music in the Catholic Church. Part one covered my background and experience of Church music growing up and part two looked at the modern “happy clappy” style of church music.

Last time I was fairly critical of the upbeat poppy style of church music which sometimes seems like the only alternative to dirge-like traditional hymns, acknowledging that it’s a style of music which certainly appeals to some people but just doesn’t jibe well with my notion of what music should bring to the mass.

I wanted to add a corollary to that, however, which will then lead on some more positive posts on musical options in the modern church.

On the pilgrimage I took part in this summer there was a terrific music group, organised by one of the nuns who was with us (who, I might add, were a far cry from the black-and-white picture of a nun you might have in your head! Another eye-opening part of the trip for me…)

They led the music at the Westminster group services we had during the week. Some of these were masses in local churches, others were simple informal gatherings for prayer. The music was guitar led, with various simple rhythmic ‘shaker’ instruments among other members of the group. If you’ve read my previous post, you won’t be surprised to hear I was slightly apprehensive to see what the music would be like!

END_OF_DOCUMENT_TOKEN_TO_BE_REPLACED

To many of my generation, classical music is unfamiliar and, sadly, unappealing.

I was lucky enough to get a fair bit of exposure through my childhood music education, but must admit that I still feel very ignorant of the standard classical corpus. I have a lot of respect for classical repertoire and those who play it, but it’s been rare that I find a piece I’ve really felt an emotional connection with. As a church chorister, there were certain pieces that I particularly enjoyed singing, and some which became emotionally resonant just through being a frequent part of that phase of my life. There have been some classical pieces outside of church music which I’ve loved. For example, much of Carmina Burana, Rodrigo’s superb guitar concertos and some of the pieces I played on saxophone (e.g. Mussorgsky’s “The Old Castle” from “Pictures at an Exhibition”).

In fact, I know enough to recognise the blunder of even using the term classical as such a catch-all, especially since all the pieces mentioned above sit firmly outside the classical period (1750-1830). But to most people my age, ‘classical’ music is just a synonym for pre-20th century, orchestral, old-fashioned, boring…

But surely there must be a future for these works which have stood the test of time, beyond just the dedicated performers and the (ever-dwindling) crowd of elite music appreciators who pay to hear them play live?

The progression of classical music into the Romantic, Impressionist and increasingly dissonant styles of the 20th century led to some strange and interesting aural innovation – but perhaps at the cost of becoming even less relatable to members of the general public. How many people d’you know who enjoy listening to John Cage or Edgard Varèse? A few years ago the Washington Post ran an experiment where world-renowned violinist Joshua Bell performed anonymously in a subway station – and barely drew a second glance from passers by.

So what is the future for classical music?

Well, I’m far from qualified to try to offer an answer to that vast and imposing question. But I think a part of it must be re-establishing the connection between the classical composer or performer, and their audience.

Classical Music on the Social Web

END_OF_DOCUMENT_TOKEN_TO_BE_REPLACED

Since I first heard about Movember a few years ago I have felt duty-bound to take part – and guilty that I never quite found the nerve. Well, this year is the year!

The Movember Effect: Awareness & Education, Survivorship, Research
The funds raised in the UK support the number one and two male specific cancers – prostate and testicular cancer. The funds raised are directed to programmes run directly by Movember and our men’s health partners, The Prostate Cancer Charity and the Institute of Cancer Research. Together, these channels work together to ensure that Movember funds are supporting a broad range of innovative, world-class programmes in line with our strategic goals in the areas of awareness and education, survivorship and research.

The official rules of Movember: 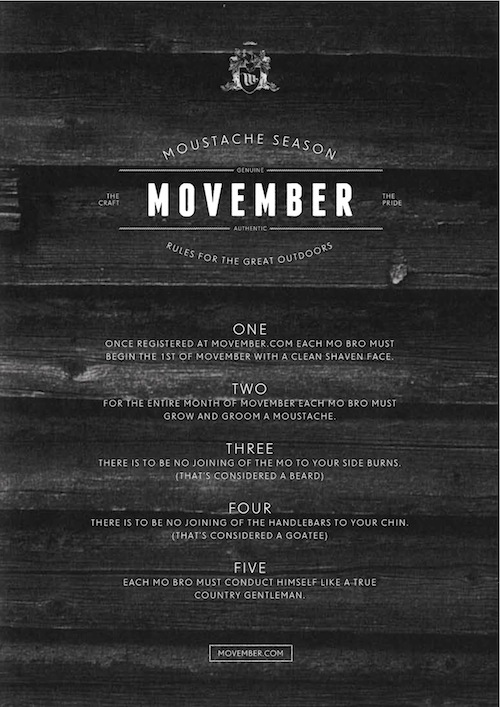 You can learn more about Movember here.

I may have bent rule #4 slightly at the start of the month, but my mo is growing strong now! Visit my profile, where you can see in-progress pics, and donate to me or my Movember team:
END_OF_DOCUMENT_TOKEN_TO_BE_REPLACED

A New Life for Music in the Church (Part Two)

This is part two in a series of posts on music in the Catholic Church. Part One covered my background and experience of Church music growing up.

So what does Church music look like today? Well it’s often very much that traditional hymn-singing I talked about.

But there are a few other types of church music…

One mode of modern church music is what I think of as “Happy-Clappy” style. That’s too disrespectful a name really, but it’s the kind of music where you’re singing songs rather than hymns, the words aren’t based on scripture but are much more informal and secular-sounding, the music is more poppy and modern. Often there are actions (I must confess I cringe just saying that) and there’s a lot of clapping and waving arms in the air.

For a long time I was absolutely dismissive of this.

There’s a body of church music coming from African-American Gospel music, which is more upbeat, lively, and, well, ‘clappy’. I respect that as a genre and a mode of worship, although it isn’t one I’ve ever identified with. I think that’s the influence behind the rise of guitar-based poppy music in Catholic churches, often as part of youth outreach efforts, or children’s masses.

In dedicated family or children’s masses I think the agenda is different, and I think that style of music definitely has a place there. But until recently I would have been pretty resistant to its inclusion in any other masses, where I feel it’s mostly a distraction.

I was given cause to rethink this by my experiences in Madrid this summer. END_OF_DOCUMENT_TOKEN_TO_BE_REPLACED