A New Life for Music in the Church (Part One)

As I mentioned in my last post, the World Youth Day trip I went on this summer was particularly inspiring for me on the musical front. I’ve long been involved with and interested in church music, but the WYD week exposed me to some new and wonderful types of worship music (along with some old familiars which I like to varying degrees!)

This is the first in a series of posts on the topic of music in the church, inspired by the new music I encountered on that trip.

As it was in the beginning…

I grew up attending Catholic mass every Sunday with my family, which about half the time featured sung hymns. Depending on which local church we went to, some of the mass setting (e.g. the Gloria, Sanctus, etc.) might be sung, but for the most part it was hymns from a hymn book, accompanied by piano or organ.

There are some fantastic hymns, and sung hymns can (if well chosen and well led) be a wonderful addition to a church service.

The big curse of church hymns is that more often than not, they are performed at a snail’s pace, leaving even capable singers struggling for breath by the end of each tortuous line, and giving you so much time for your thoughts to wander during each verse you’re surprised the thing ever ends! Don’t get me wrong, I’m not some weirdo with a fetish for super-speedy hymns. I’m just looking for a reasonable tempo that’s something approximating speaking speed; enough to give the words some meaning and allow natural phrasing.

I’ve been guilty in the past of blaming this slow pace on the high average age of congregations, and the (probably incorrect) assumption that the hymns are played slowly because “that’s how the old ladies like them”. However, I’ve experienced this problem even in youthful congregations, and even with relatively young music directors.

I’m not sure what the root cause is, but hymns played so slowly they suck the life out of you and turn a thing of joy into a dreary drain on your spirit is one of my biggest pet hates in life. 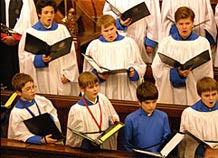 Alongside this experience in the Catholic church I sang for many years in my school’s “Chapel Choir”, first as a young treble, and then later as a teenage bass. We tackled more complex music, and in a Church of England rather than Catholic setting, so I got to see a whole other side to what church music could be.

I grew to appreciate the solemn, respectful tone a classical 4-part choir could bring to a mass or evensong, and I owe much of my development as a musician to my time as a chapel chorister.

Mostly the hymns were sung at a decent tempo, and strong, clear 4-part harmony tends to help liven them up in any case!

Is now and ever shall be?

And so it continued, for several more years: I’d attend Catholic masses, and more often than not be bored by the hymns rather than enjoying them. I’d occasionally sing in a choir or close-harmony group and enjoy performing more interesting and uplifting spiritual music.

I retained the impression that music performed by the congregation at church was dull, and it took a ‘performance’ by a choir to bring interesting, energising music to mass.

Actually, that’s not quite the whole story. I was conscious that there was a whole other style of church music out there, which I found off-putting for different reasons, glimpsed from afar, too different from my own experience to really relate to.

Until I went to Madrid…