Aside from the skillful use of a digital loopstation, what is perhaps most striking about the duo is their mixing of musical styles, blending pop, and Western and Indian classical music into one surprisingly cohesive performance. Speaking of blending – I’m not sure I’ve heard more perfect blending of a male and female voice before. This pair complement each other wonderfully and both sing with acute awareness of the other’s voice. A delight to simply close your eyes and enjoy listening to.

One fun moment came during their rendition of Paul Simon’s classic “Me and Julio Down by the Schoolyard”, where they enhanced an already powerfully rhythmical performance with a “Solkattu” rhythm language vs beatboxing showdown, trading rhythms back and forth before transitioning expertly back into the song’s finish.

They finished with an Adam Young song, “Fireflies”, which had a powerful build up using live looping and left me very keen to see a full performance by the duo in future.

I’d been impressed and entertained by Pete Churchill’s workshop earlier in the day so I had high expectations for his London Vocal Project. The way he introduced the group gave the impression of them being an all-star talented jumble of musicians and music directors, who sang together mostly just for the fun of it.

They sang a strange and varied programme, all very skillfully performed, but to my taste a bit hit and miss. This is where I have to confess that I’m just not a Bobby McFerrin fan. I do love his demonstration of musical instinct using the pentatonic scale, 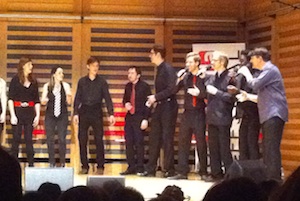 and I’ve heard enough glowing reports from people whose music tastes and discerning judgement I respect to know he’s probably very good. But as it stands, I have yet to be won over by his music. I tried hard to like VOCAbuLarieS but after a couple of listens it wasn’t doing much for me. Anyway, I confess this just to note that in this performance it was the three McFerrin tracks which, while technically impressive, just failed to catch my interest.

On to the positive – four compelling and emotive blues and gospel songs, in original arrangements by Pete Churchill. Stevie Wonder’s “Love’s in need of love today” was quite moving, featuring a male soloist with a lovely broad soft voice. 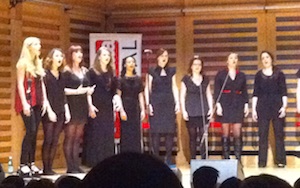 The Basie standard “Lil’ Darlin” was excellent, with Jon Hendricks’ retrofitted lyrics, and featured a wonderfully sultry ‘trumpet’ solo. One couldn’t help but smile at the fun gospel track “That Lucky Old Sun”, and the blues ballad “City of Dallas” had similarly entertaining lyrics which I particularly enjoyed.

A terrific performance – and no doubt if I appreciated McFerrin’s work more I would have been bowled over. Certainly an impressive ensemble in any case! 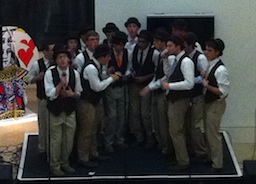 I was sorry to miss the foyer performance by The Lah De Dahs but did catch a good set by The Brown Derbies who hail from Brown University in the states and sing an assortment of fun pop covers.

Opening for The Swingle Singers were the relatively recently founded (2006) Euphonism – a 7-strong group (like the Swingles themselves), started by Amanda Aldag who had participated in the panel session earlier that day. The best description I can provide is: they brought the party. Their set of energetic and rousing arrangements of pop hits, including recent Duffy hit “Mercy” and a Michael Jackson twofer of “Smooth Criminal” and “Billie Jean” filled the hall with a lively spirit.

Though the singing and dancing was slightly rough around the edges at times, their upbeat attitude and moxie was hard to resist. The audience showed loud appreciation, so I know it wasn’t just me who enjoyed this set!

After, we were treated to another Albert Hera spectacular before the Swingle Singers took to the stage. This time the clowning songster was accompanied by the London Vocal Project, and he stirred up the audience and his chorus into a varying mixture of rain and storm sounds, playing with rhythm and texture, always punctuated with big smiles from him and bursts of purely joyful laughter from the audience.

Albert Hera did not really glow with the brightness of ten suns.

The Swingle Singers – and friends!

Having seen The Swingle Singers in concert a number of times before, most recently at the Covent Garden Apple Store performance of Christmas songs, I had slight apprehension that this concert might be somewhat dampened by familiarity. I’m glad to say this was far from the case! Not only did they perform a great mix of old and new songs from their huge repertoire, they were joined by other festival performers for more than half the songs – making this a mini-festival experience in itself!

Songs ranged from the beautifully lush harmonic tensions of “Hiding your smile” (from the recent Yule Songs EP) to the fantastic “After the storm” with solo by Oli Griffiths, and a whole variety of guest spots.

The seven were joined by Albert Hera for their sleek Libertango, Cadence for a strong and moving rendition of “Poor wayfaring stranger” and Dylan Bell from Freeplay Duo providing scat for a new favourite of mine, the Beyoncé knock-off “All the Swingle Ladies”! I was particularly impressed by the performances of Debussy’s “Clair De Lune” and Elbow’s “Weather to fly”. 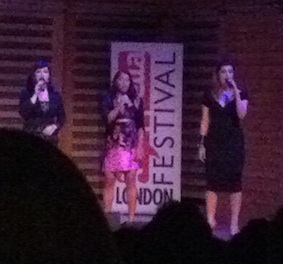 A special highlight was the premier of a new arrangement by David Jenkins of “Full Fathom Five” from Shakespeare’s The Tempest. This was one winner of the LACF composition competition and perfectly suited to the Swingle Singers’ style. They were joined by Suba Sankaran from Freeplay Duo, to create a commanding stormy atmosphere. Terrific!

They finished up with a powerful grand finale, featuring Cadence, Freeplay Duo, The London Vocal Project and Albert Hera: uplifting gospel number “There’s a change in my life” from the Steve Martin movie “Leap of Faith” (which had actually featured in the morning’s improv workshop). This was a hugely enjoyable one to end on.

Of course there was the traditional encore! Swingles only, with two Beatles songs – “Blackbird” and “I will”, to round the concert off on a softer note.

I wrote about the Single Singers project in my previous post – short version: an ad-hoc supergroup of a-cappella-singing festival-goers, assembled at short notice with minimal rehearsal before their performance.

We’d been given a taste of their performance earlier in the day, with a surprise number during the panel session, but the main Single Singers performance was scheduled for after the festival’s grand finale Swingle Singers concert on Saturday.

As the audience emerged from the terrific Swingles gig, it was clear nobody was quite sure what to expect. There was a much more confused and uncertain vibe in the audience compared with the other foyer performances during the festival, but it was a strong turnout to see what this rag-tag band would produce…

The Single Singers assemble at the London A Cappella Festival

It’s a good sign of the interest and enthusiasm in the Single Singers project that there were simply too many of them to fit on the foyer stage! But they assembled themselves as best they could, and made a strong start with a repeat of the afternoon’s “Praise You”. It’s a really vivacious arrangement which they performed with skill and gusto. They moved onto a Bryan Adams(?) song, “I will be right here waiting for you” and it was clear from their smiles they were enjoying themselves. Paul Simon’s “Mother and Child Reunion” was sung with care, and though Del Amitri’s “Nothing ever happens” was perhaps a little bland, that’s a minor gripe in the midst of a strong and engaging set. They wisely finished with another gleeful number, a fun gospel song “Glory train”.

If the group were nervous about their first real performance together or intimidated by following a fantastic concert by the Swingle Singers, it didn’t show. They closed their performance on a great upbeat note and left the audience to go away smiling – with excellent memories from a remarkable festival.

I may not be the first to say it but: