A New Life for Music in the Church (Part Four): Taizé

This is part four in a series of posts on music in the Catholic Church. Previously: Part one, part two and part three.

One big discovery for me during the World Youth Day trip was the music of Taizé – a Christian community in the East of France, where they have cultivated a distinctive style of worship, welcoming all denominations of Christianity and putting visual icons and a particular kind of repeating sung music at the heart of each service.

I don’t think I’d ever heard of Taizé before that week, though looking back later I realised I had once experienced their music.

A First Taste of Taizé

During a period of quiet prayer in a vigil service in my church last Easter, somebody started singing a simple tune, and others joined in:

The words were so short and the tune so simple, that within a couple of repeats I was able to join in, singing softly with the dozen or so other people there. It was a wonderful peaceful addition to the service and a really memorable moment for me. I recognised it as a new and different form of sung music than I was used to, but didn’t have the relationships or the information to really follow up on it and learn more at that time.

During the World Youth Day trip, some of the music used by our excellent volunteer choir was in a similar vein. In particular this piece caught my attention:

I made the connection and as I talked to others on the trip I learned this was “Taizé” music, and that there was a whole tradition and back catalog to be discovered. I found this really interesting: something about the gentle, repeating, nature of the music and the way its repetition made it somehow welcoming to all singers really resonated with me.

Later in the week, one of the priests on the trip had the thoughtful insight that since I was musically inclined, I might be interested to accompany him to a Taizé service he was going to. I am truly grateful to him for this, as it was clearly something quite special and personal for him, and so to invite me to join him was really quite kind. I was delighted to have the opportunity to experience more of the music.

The service was quite remarkable. I hadn’t been sure what to expect, but Father Richard explained a bit on the journey there about the history of the Taizé community, how their services tend to work, and some of what it’s like to visit the place itself.

The service was held in a vast cathedral “Iglesia Basílica Hispanoamericana Nuestra Señora de la Merced” near the center of Madrid, where the altar backdrop was a striking modern metal display, complete with crucifix of dark brown metal beams:

The Taizé brothers and sisters had created their own environment beneath this grand, imposing backdrop, using dark red sheets to set a more gentle tone, lighting candles, and placing a small number of religious icons around the altar. 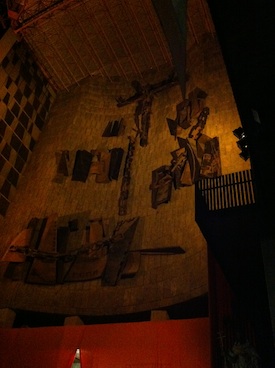 The form of the service was primarily singing, with some short readings interspersed. The congregation had song sheets with about 30 Taizé ‘chants’ on. I hesitate to call them that, as it summons up ideas of drone-like Gregorian chant. Although these have the repetitive characteristic of a chant, they are actually far more light and musical than one would expect from that name.

Most of the congregation sang the tune, but some sang harmonies instead. Indeed, one of the things I had most been enjoying about the Taizé chants used by our own choir that week was that I could experiment with adding harmonies as we sang, making up my own parts to complement the tune.

And this is one of the wonderful things about the Taizé music: because it is so simple at its core there is great potential to develop from this, in individual ways or as a body.

Though the tune was always prominent, often the small group of Taizé brothers and sisters would sing the harmonies.

Most chants were accompanied by guitar, but some with flute. Always gentle, finger plucking guitar, or softly-intoned flute harmonies.

Some of the chants had a congregation part but also featured solo verses, over the top or alternating back and forth with the chorus. These were sung beautifully by one of the Taizé brothers or sisters.

Another distinctive feature of the music is that every chant has lyrics in several languages. Generally English or Latin as the default, but then French, Spanish, German, Polish, and other languages to fit the same tune. People were free to sing in whichever language they chose, and sometimes a chant would begin in one language and then transition to another after a while. This beautifully reflected the wide variety of nationalities represented in the World Youth Day congregation, creating musical unity from diversity.

An example: Nada Te Turbe with words in 8 languages

Towards the end, the pace slowed, a particular icon was presented, the Taizé (or “San Damiano) cross and the congregation invited to come up and pray over the icon if they chose. The music continued while hundreds of people queued up, each taking a few minutes to kneel over and pray at the crucifix icon. It was a really moving end to an astonishingly peaceful and beautiful service. 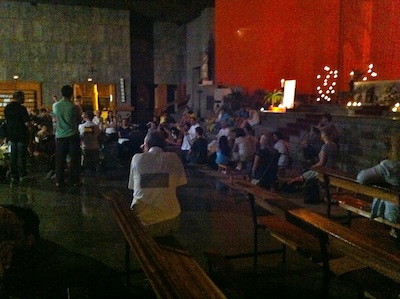 Over the course of the week I was struggling somewhat with various questions about church music, what worked for me and what I thought church music should be about. This introduction to the music of Taizé was a true beam of light in the midst of all that, giving me a new hope that there was wonderful religious music being created today. New music, but with the reverence and respect of traditional church music. Music which touched me, and gave me the peace and the space to connect with God.

I’ve since found a couple of Taizé services around London, and it’s been fascinating to talk to people there about their experiences – many of whom turn out to have visited the Taizé community itself. I feel like I’ve uncovered a secret world of people who are passionate about this kind of music in worship, and now that my eyes have been opened to it, it seems amazing that I spent so many years oblivious to it.

Needless to say, I’m hugely grateful for having discovered it now.

If you aren’t familiar with the music of Taizé, you can find some recordings of recent services here:

and Spotify has a good range of Taizé albums. Here’s my playlist which you can stream:

Do you have experience of Taizé music or recommendations to share?
I’d love to hear from you.