The Current is good music.

They’re a radio station based in Minnesota, part of Minnesota Public Radio – which means that despite having no links or particular interest in Minnesota (at least to begin with), I’ve ended up learning far more than I ever expected to about the Twin Cities, traffic, weather, local shops and life in St. Paul.

I tend to listen when I’m in the kitchen in the morning, when it’s still the middle of the night there, or in the afternoon when I catch their morning shows. And I partly enjoy it for how it transports me to somewhere more light-hearted and exotic than gloomy London, especially in the winter months. At least, I imagine it to be exotic.

Popular among Minnesotans (and also me)

On my honeymoon my wife and I attended a traditional touristy luau. And as we got chatting to the couple next to us, it emerged they were themselves from Minnesota. I immediately burst into an enthusiastic endorsement of The Current and was delighted to find they were listeners themselves! 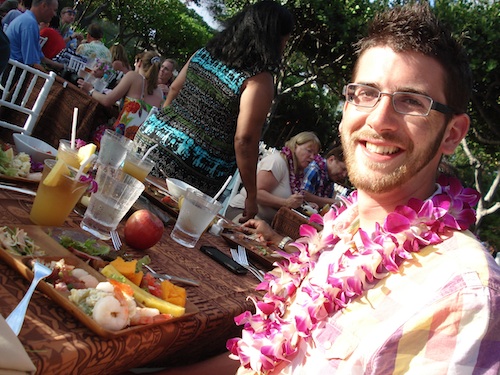 Me, seconds before learning that all Minnesotans listen to The Current

Why I listen, and why you should too

So there it is. If you like good music, check out The Current some time, and like me, enjoy pretending you’re a Minnesotan. A Minnesotan with great taste in music.

P.S. They have just started their annual member drive for donations. It’s listener-supported public radio, so donations are important.

This is a good and a bad thing for you, as a potential new listener. Bad, because they’re immediately asking you for money. This is not the usual manner of The Current! But also good, because you will hear about all the great things the station does, and see just how courteously and creatively they go about something as commercial as asking for money.

I just donated. Once you’ve listened and begun to appreciate the station’s unique excellence, perhaps you will too.