The Mountain Goats (which mostly means John Darnielle himself, though sometimes joined by collaborators like Peter Hughes & John Vanderslice) are uncontestably one of my favourite bands, as my Last.FM listening history makes clear. My wife’s not so much a fan, recently asking me if listening to Mountain Goats made me feel down. I replied “No! … Well, sometimes. It depends what song.”

With a vast back catalog spread across 14 albums and innumerable tapes, EPs and bootlegs, there are still far more Mountain Goats songs than I really know well, and yet those I know back to front cover the gamut of human emotion (and then some). When I’m down I’ll listen to something like Gameshows Touch Our Lives. When I need a lift I might throw on Jam-Eater Blues. And when I’m feeling hard done by yet aggressively resilient I’ll grab my guitar and perform Ox Baker Triumphant or This Year loudly (and feel much better for it).

Any Mountain Goats gig is good news. I’ve made sure to catch them the last couple times they’ve played the UK, and been in no way disappointed.

I learned of Owen Pallett at the Route Du Rock festival in France a few years back, where he performed an amazing set on violin with heavy and expert use of live looping. I was blown away. I think I only went because he had such a terrific videogame-inspired band name (“Final Fantasy”). I remember he finished his set by taking requests from the audience – not for songs from his own albums, but from “any song from the 20th century” – which he’d then knock out of the park. Incredible. I was skeptical his recorded music could live up to that live experience, but his album “Has a Good Home” quickly became one of my top albums of all time. It’s one you need to listen to start-to-finish: the vocals, lyrics, sound textures, rhythms – all just sublime. But check out This is the Dream of Win and Regine to get a taste:

So: a collaboration between Owen Pallett and John Darnielle? That is going to please me. And sure enough, the Mountain Goats album Pallett recently produced sounds wonderful and features some great string parts. And, like back when I discovered Amanda Palmer knew Neil Gaiman, it just makes me strangely pleased to discover two artists I love actually know and like one another too.

At last night’s concert Darnielle introduced Anonymous 4 by explaining how his father had once given him a gift of one of their CDs, An English Ladymass, which was unexpected and came at a time when he was almost too busy to listen to it. But hearing it he was transported to another world and they’ve remained a big favourite of his ever since. My own tale is similar, discovering them through my dad’s recommendation and a lent CD (A Lammas Ladymass) and finding them odd but wonderful.

I was excited to discover how a collaboration with The Mountain Goats would turn out since it certainly wasn’t an obvious pairing!

And so the concert, which was in a way a pre-launch promotion gig for the next Mountain Goats album, “Transcendental Youth”, due out later this year. The concert was designed masterfully, in that it began with a set by Anonymous 4, then a solo Mountain Goats set, before a joint performance of half a dozen tracks from the upcoming album. This allowed the audience to enjoy each artist as well as the collaboration and no doubt made some new Anonymous 4 fans from Mountain Goats fans and vice-versa. 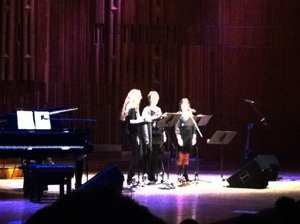 Unfortunately Susan Hellauer, one of the four singers from Anonymous 4 was unable to travel to the event and so Owen Pallett, who was responsible for arranging the Transcendental Youth tracks, stood in. Between his versatile and wide-ranged voice and a couple of contributions on violin, he filled the role marvelously – in fact prompting Marsha Genensky to comment that it felt like he’d been a member of the group for years!

I hadn’t seen them perform live before, but I enjoyed the Anonymous 4 set hugely. It ranged from plainchant and ancient choral to folk songs and even gospel, and it was remarkable how well their voices blended while still each retaining a distinctive sound. Normally one hears a soft blend of voices (as in a large choir) or a set of disparate voices, but they somehow managed both. I’ve found ear training for hearing harmonies in parallel (e.g. tracking each voice in an a capella group at once rather than just hearing the whole) really rewarding in the past and I deeply enjoyed listening to Anonymous 4’s performance: at times listening actively and relishing their masterful delivery, at other times simply relaxing into the wonderful sounds they created. 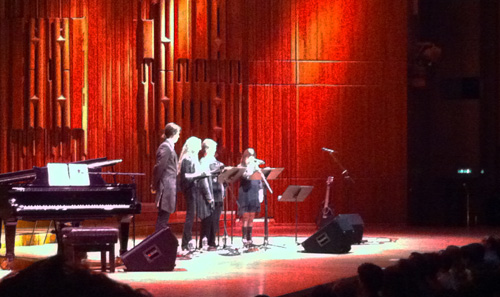 After a selection of songs as a trio they introduced Pallett, and then rounded off their set with a couple of songs featuring Darnielle too. It felt like some kind of a crime to relegate his voice to providing a bassy drone but this was more than rectified later in the concert! 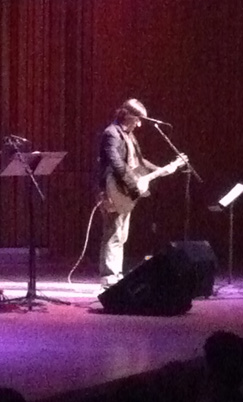 After a short interval Darnielle returned to the stage for the solo Mountain Goats set. As ever, he was cheerful and joking between songs, treating the audience as long-standing close friends (as I’m sure many of them feel they almost are). Alternating a few times between guitar and piano, he performed a few tracks from the forthcoming record, a couple from the last few years and a few oldies including one of my favourites, Your Belgian Things.

The Mountain Goats have always had a very liberal attitude towards concert tapings and bootlegging, and though I almost never record at gigs (and was no better equipped to than having an iPhone in my pocket) I did record a bit of last night’s remarkable performances. I’m going to share a few lo-fi recordings here – they can’t do justice to the amazing experience, but it seems wrong to keep them to myself.

Either of those sets would have made for a terrific evening, but the third was a highlight even beyond them. As Anonymous 4 and Owen Pallett joined Darnielle on stage for the third set, songs from “Transcendental Youth”, the audience made clear quite loudly that they were as excited as I was to hear what this collaboration held. 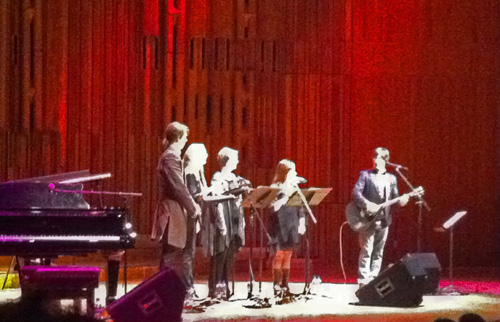 I’m reluctant to try to describe the result because I’ve already exhausted my supply of enthusiastic superlatives in the text so far. But then, the recordings below don’t quite do it all justice. Suffice to say that this is a fantastic new development in the sound of The Mountain Goats, which has progressed over the last 10 years from analog tape lo-fi to a lush recording studio sound and increasingly sophisticated instrumental arrangements, to this latest form, in which Darnielle’s songs are given the powerful and emotionally evokative backing they perhaps always deserved.

So with the caveat that you need to believe me that these sounded even more tremendous live, I give you my poorly recorded capture of what was a stunning, powerful, uplifting and for me deeply musically satisfying performance:

I really wasn’t planning to write anything about last night’s concert, at the time just enjoying it for my own sake. But having been so moved by it, and excited about the forthcoming album I felt I had to say something.

So there it is.

Sorry the clips aren’t better. Sorry I didn’t tape the whole performance. Sorry you didn’t get to come to the concert and experience it live.

But let’s look forward to what promises to be an incredible new Mountain Goats record in 2012: “Transcendental Youth”.