My Avian Awakening: Learning to hear the music of birds

It’s often been said that birds are nature’s musicians. They have an incredible variety of sounds and songs, and each species has its own distinctive calls. An experienced bird-listener can identify the type of bird just by its song. And from Vaughan Williams to Olivier Messiaen to Bob Marley, the music of birdsong has long inspired composers in their creations.

One of the wonderful things about developing your ears is that the more you learn about the sounds you hear, the richer the world around you becomes.

Just as a capable musician will hear riches and depths in a piece of music far beyond what the regular man in the street hears, somebody who has taken a bit of time to understand the sounds of nature will experience the world around them in a fuller, more inspiring and ultimately far more enjoyable way.

I recently enjoyed this kind of transformation with sounds from an unexpected source: birds.

If you grow up in England, taking an interest in birds is something of a social faux pas. There is a long-standing stereotype of the bird watcher as a sad obsessed nerd who has no ‘real life’. Like the train spotter, he suffers prejudice as someone who lacks friends, or any appreciation of ‘cool’ stuff. Cool stuff like football, chasing girls, drinking too much… and whatever else the current prevailing social conventions happen to be.

Of course, as they grow up, most people realise how silly and arbitrary the cool/sad distinction is – and how anybody with a passion or a hobby they’re enthused about is a deeply lucky individual. You begin to see that somebody with a specialised knowledge of an intricate subject is to be admired, not stigmatised or ostracised.

Although I have yet to be won over by bird watching, I have had my mind (and ears) opened to the wonders of bird listening.

Last summer, as the weather in London finally began to warm up, it became necessary to sleep with our balcony door open ajar. I’d generally wake around 6 or 7AM and I began to notice that before I opened my eyes each day I could experience something of the dawning day outside – by listening.

Though we live way up on the third floor, we’re fortunate enough to have a row of tall trees running alongside our building and it would have been hard to miss the pandemonium of bird sounds emanating from those trees each morning. 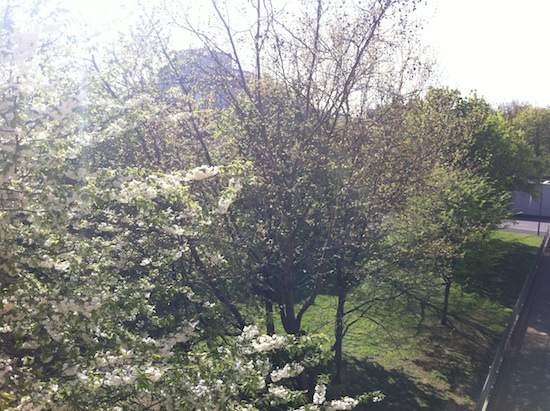 At first I just heard “birds”. “Oh, there are some birds making noise” was my subconscious reaction, before my brain automatically tuned out the sound. Then, as I lay there and paid a little attention, I became aware of the wide variation in timbre and pitch, and started to hear particular snippets coming and going. After a week or two I was recognising particular patterns which were becoming familiar. There was a particular kind of chortling call which kept catching my attention (through my drowsy slightly-reluctant-to-be-awake haze):

As with all things aural, once you begin to recognise it, you begin to appreciate it. What before had just been part of the audio jumble was now something I felt a connection with, and took a small delight in hearing crop up now and again.

Once I recognised one bird’s song, it wasn’t long before my ear automatically began to classify several others:

Unexpectedly, I found listening to the birdsong emotionally uplifting. In the same way that opening my eyes in the morning to a sunny blue sky invariably put a lift in my heart and a smile on my face, these bird sounds, as they gradually transformed from miscellaneous cacaphony to ordered beauty, began to be part of a wonderful boost to my spirit at the start of each day.

Curiosity (not just for cats)

Gradually my curiosity got the better of me. I knew almost nothing of birds or their songs, and didn’t know whether the songs I was recognising were specific to a species, a family, or even a particular small bird living outside. But suddenly I wanted to put names to the sounds which were becoming so familiar. The songs were so loud and clear, I imagined the birds must be right outside the window, and eventually I bothered to go out and look. By this time though, the trees were full and green, and it was hard to spot any birds in the midst of the leaves – let alone catch sight of one singing.

By chance, the subject came up in conversation with a friend around that time. Due to my work with Easy Ear Training, we’d been talking of iPhones and ear training apps, and he mentioned recently having bought his mum, a bird enthusiast, an app for learning to recognise birdsong. It hadn’t occurred to me that there would be such a thing – and I was too immersed in musical ear training to really consider spending time developing my ear for birdsong instead.

Once the seed was planted however, I couldn’t ignore it.

As I heard the birds outside my window each morning, I now knew there was a way to put names to the sounds, and so it wasn’t long before I bought “Chirp!” 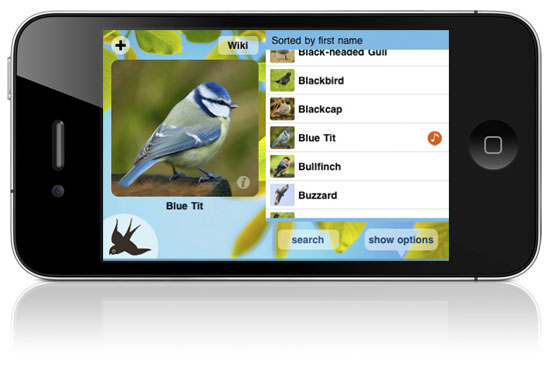 Chirp! is a lovely little app for learning to recognise birdsong. You can select your region, and the app will teach you the songs of the birds common to that area. I initially used it just as a reference, chasing down the birds I’d been hearing in the mornings (blackbirds being the ones which had initially caught my attention, chaffinches and great tits* after that), and some I had grown up recognising: wood pigeons nested in the great chestnut tree at the bottom of my childhood garden, and every child who’s been to the beach will recognise the sound of seagulls!

Of course once I felt I could recognise a handful, I couldn’t resist the app’s quiz mode. You can choose a difficulty level or set up a custom group of birds, and then try to identify their songs as you hear them, gaining points for how quickly you respond and how reliably you get the answers right. 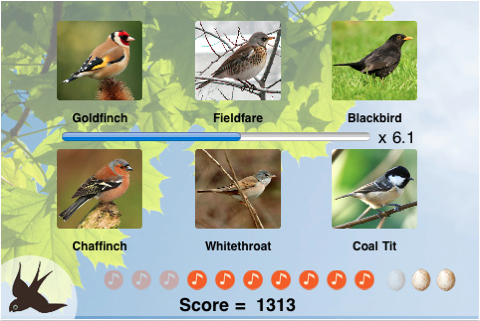 What had started as a simple desire to name the songs I was already recognising became a whole new direction to stretch my ear in. Where before I had always just heard birds singing as, well, “birds singing”, and mostly tuned out the sound automatically, now every time I walked down the street the sounds would leap out at me. Some I’d know and be able to put names to (“Hey, there’s a blackbird somewhere in that tree!”) and others I could simply appreciate in a way I never had before (“Oh, that pattern repeats, but the ending is a bit different each time”, “Wow, the pitch range of that call is huge!”)

I was a bit self-conscious, having carried the prejudice against bird-watching for too long to happily accept my newfound avian appreciation. But as somebody who finds joy in developing my ears, it was wonderful to discover this new dimension to the auditory soundscape I walked through every day.

This is my message to you

As with most things in my life, I had a short spurt of deep enthusiasm, learned a lot; and then wandered off, distracted by a new interest. But I still occasionally open up the app and check my aural memory. I still delight in hearing the birds outside my window and knowing their calls apart. And I’m grateful for having had my ears opened up to a wonderful part of the world around me.

If you’ve never taken the time to learn anything about birdsong, I would highly recommend doing so. Pick a few birds you know by name or sight, and listen to recordings of their calls. Listen for the differences in pitch, pattern and repetition. Alternatively try to listen out for the birds near where you live, and see if you can start picking out particular songs.

It’s been said that a little knowledge is a dangerous thing, but this is a case where the opposite is true. It takes little effort to open your ears to this rich source of natural beauty, but it enhances your experience of the world tremendously. Whether you’re a nature fan, musician or ear training enthusiast, taking a bit of time to get to know the music of birds is a enormously worthwhile.

Just don’t tell the bird-watchers I said so.
Blackbird picture courtesy of jipe_dk.
The birdsong clips included above are from BBC Radio 4 – check out that page for more clips, with added commentary and explanation.
* I know, right? Tee hee.